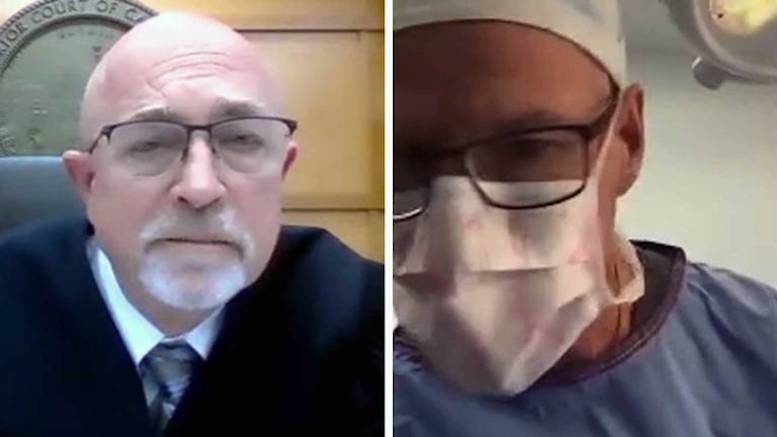 This wasn't a Zoom filter, either

Look, we’ve all had to make adjustments during this difficult time. For the most part, judges have been very understanding when it comes to handling court appearances by video. For one thing, mistakes will sometimes be made. See, e.g., “Cat Appears for Hearing After Zoom-Filter Mishap” (Feb. 9, 2021). For another, most judges are okay with a more casual “dress code” for video appearances. Even if they aren’t, you can always get away without wearing pants, as long as you don’t get up and walk around—or do anything else—while your camera is on. See Assorted Stupidity #141 (last item). So in general, court appearances are much less formal at the moment.

You should be aware, though, that at least in Sacramento County, CA, the court is not comfortable with you operating on patients during a live-streamed court hearing.

A plastic surgeon who was scheduled for a traffic-court trial on Thursday evidently decided he could deal with that without leaving the operating room. The clerk was only briefly fazed by this.

“Hello, [Dr.] Green?” he said. “Are you available for trial? It kind of looks like you’re in an operating room right now.”

Once the traffic-court commissioner showed up, though, he had a few more questions.

“So unless I’m mistaken,” Commissioner Gary Link said, “I’m seeing a defendant that’s in the middle of an operating room appearing to be actively engaged in providing services to a patient. Is that correct?”

Yep, that was correct. Green told the commissioner there was nothing to worry about, because he had “another surgeon right here who’s doing the surgery with me,” apparently reasoning that he could stop and testify while his colleague continued the operation.

“I don’t think so,” Link responded. “I’m concerned about the welfare of the patient based on what I’m seeing.”

Based on the video below, apparently edited by someone at the Sacramento Bee from the court’s livestream, it looks to me like they had prepped the patient for surgery but hadn’t actually started cutting yet. Of course, that wouldn’t make it okay, but it would be significantly better than if the patient was already open at the time Green made his court appearance. See what you think, especially regarding what might be going on at about the 1:05 and 1:15 marks:

Given that Green is a plastic surgeon, he (sorry, they) could have been preparing to do a nose job or some other facial surgery. I don’t see any evidence that the carving had actually begun, although you can see Green bend down over the patient during this time.

And if you zoom way in at about 1:05 (just after the frame above), it looks an awful lot like he might have a scalpel in his hand:

But then I’m no doctor, and to me every shiny thing in a doctor’s office looks like a scalpel, or at least I’m afraid it might be sharp. For all I know, this is just a medical Sharpie or whatever they call the thing they use to mark where they’re going to cut, if they do that. Or maybe it’s just a pointer.

Anyway, there’s no reason for me to speculate further, because the state medical board said Friday that it would look into the matter. It of course will be focusing on whether Green followed the standard of care when treating the patient. As for the question whether you should appear for a court hearing via Zoom while also engaged in surgery, or maybe operating heavy equipment or trying to land a plane, the answer to that is no. You should try to reschedule.

Lawmaker Will Keep Promise to Run Naked Through Town