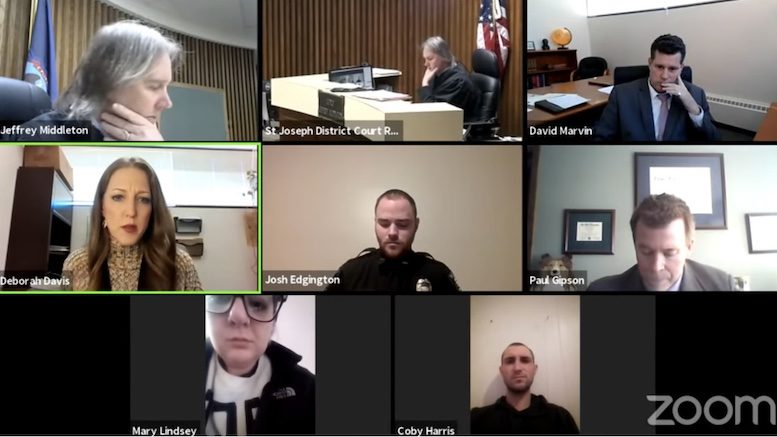 I think it was Albert Einstein who said that if a particular technology makes n good things possible, humans will think of nc2 stupid things to do with it, assuming a spatially closed universe with a positive vacuum energy and a Robertson-Walker metric of d 2 = [R (t) Sk (r) d]. Obviously that makes no sense at all but then he was drinking a lot at the time.

Here are a couple more things that make no sense: (1) trying to write a second paragraph with an even more elaborate Albert Einstein joke, which is just going to delay things even further and end up with a payoff not remotely worth the effort, and (2) trying to get something past Deborah Davis, an assistant prosecutor in St. Joseph County, Michigan. Learn from this article and do not try either one.

Last Tuesday, Davis was participating in a virtual court hearing that involved charges against Coby James Harris, who was accused of assaulting his ex-girlfriend. The hearing was live-streamed and made available on YouTube (see below). Also participating were Harris, his attorney, the judge, a police officer, a court clerk or reporter, and the alleged victim. The hearing was to determine whether there was probable cause for trial, and so the alleged victim was called to testify. (The officer presumably was also going to testify, but he didn’t get a chance to do that.) After some initial business, she is sworn in and Davis begins asking her questions.

I’ve watched this video a few times, and I’m not sure I would have noticed what Davis did. Well, I take that back. I would have noticed the ridiculousness of the hearsay objection the defense attorney makes at about the 7:16 mark. The witness says she called police on the night of the incident, and Davis asks her what she told the responding officers. That draws the hearsay objection, followed by some words that make about as much sense as Einstein’s alleged comments above. If the question had been “what did the officer tell you?” (i.e., what did you hear the officer say? get it?), the objection might make sense. But a person testifying under oath about what she said is not hearsay. That is testimony.

But that’s not the main reason Davis is making the face she’s making in the video at that point. The main reason is that, based only on demeanor and body language, Davis has figured out that although the defendant and his accuser are in separate windows on the screen, in fact they are in the same place and possibly in the same room. The concern, obviously, is that he is there trying to intimidate her into recanting her story.

“Your Honor … I have reason to believe that the defendant is in the same apartment as the complaining witness right now,” Davis said, “and I am extremely scared for her safety. The fact that she’s looking off to the side [probably at him] and he’s moving around, I want some confirmation that she is safe before we continue.” The judge then starts asking questions, and Harris gives him a fake address, a lie that falls apart immediately when the judge orders him to go outside and take a picture of the address. Oops! No can do? Maybe the officers who are arriving at the witness’s home right about now can help you figure out how to work your phone.

The judge revoked Harris’s bond. “This is an issue we didn’t have” before the pandemic, he said later, given that in most cases it’s going to be harder to intimidate a witness in open court. “That’s the first time I ever had anybody sitting in the next room potentially intimidating a witness,” the judge said. It should probably be the last time anybody tries to put one over on Deborah Davis, that’s my advice.

The Guardian(s): Lawyers Shadowed Olympic Torch “Every Step of the Way”