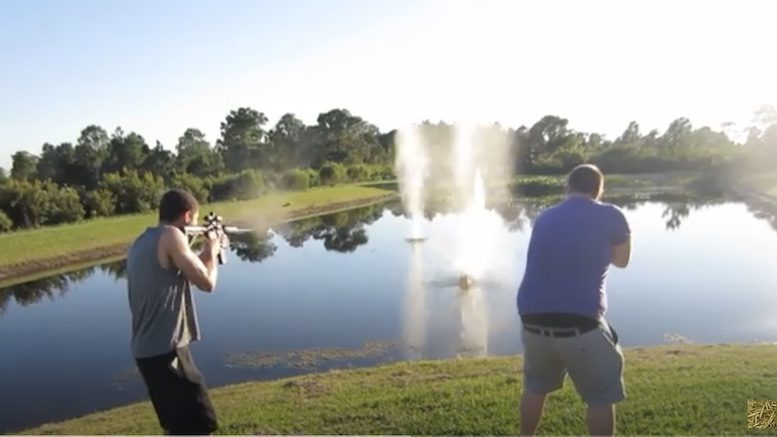 The answer: Yes, but only (1) on Lake Champlain, Vermont, between March 25 and May 25; (2) in Virginia between April 15 and May 31, except for Sundays, on that portion of the Clinch River within Scott County; (3) in Alaska, if the fish are onboard a vessel after having been legally caught; or (4) in Hawaii, if the fish is a tuna or billfish that has already been caught and gaffed, or is a shark.

A much better answer: No, with a few narrow exceptions.

I’ve researched many ridiculous things over the years, mostly for this website. But for the answer above I’m relying on Michael Smith, an associate at Glaser Weil Fink Howard Avchen and Shapiro LLP in Los Angeles. He has written what is clearly one of the greatest law-review articles of all time, entitled “Shooting Fish,” in which he surveys the laws of all 50 states and the District of Columbia to answer the question posed above. See Michael L. Smith, Shooting Fish, 12 Ky. J. Equine, Agric., & Nat. Resources L. 187 (2020) (also embedded below). This is a terrific article in every way and a long-overdue contribution to legal scholarship in the United States. To be clear, it’s not just that the article is on a completely ridiculous (but real) legal topic, it’s also funny. And not just the funniest article ever to appear in the Kentucky Journal of Equine, Agricultural, & Natural Resources Law, although it probably is that too.

I would be a huge fan of this article even if I weren’t cited in it, but it so happens that I am. I appear in footnote 2, a footnote that appears between citations to Oliver Wendell Holmes Jr.’s The Common Law and a 2018 article about invasive carp. (That seems just about right, to be honest.) You can probably imagine how pleased I was when Michael told me, “I doubt I would have written the article without the chapter in your book on Wyoming’s law against shooting fish.” See Shooting Fish, 12 Ky. J. Equine, Agric., & Nat. Resources L. at 187 n.2 (citing Kevin Underhill, The Emergency Sasquatch Ordinance: and Other Real Laws That Human Beings have Actually Dreamed Up, Enacted, and Sometimes Even Enforced 237 (2013) (analyzing Wyoming’s prohibition on shooting fish and noting that “[i]t’s hard to say how common it is for people to try to fish with firearms”)). We still don’t have a clear answer to that question, but we have a lot more data now. The practice can’t be that uncommon, or else there wouldn’t be laws in pretty much every U.S. jurisdiction aimed at regulating it.

I won’t go through the answer above in great detail, because you can and should read the article for that. But Michael agreed it was an accurate summary of the results of his research on the laws of projectile-based fishing in the United States. Even a quick gander at that summary, though, should tell you that for all practical purposes you should really assume the answer to the question is NO, with rare exceptions. I mean, even in Alaska, it is illegal to shoot fish unless you’ve already caught them in some other way. And if you can’t legally shoot something in Alaska, you should probably assume it’s not okay in the rest of the country, either.

As noted above, though, two eastern states do have very specific exceptions to the general ban on this practice. Each has set aside specific bodies of water and time periods during which people can show up and blaze away at the local fish. (Please note, however, that the answer above only addresses whether fishing with firearms is legal, not things like permit or license requirements and so forth.) Do people actually do this? Of course they do. See, e.g., “How to Catch Fish in Vermont: No Bait, No Tackle, Just Bullets,” New York Times (May 11, 2004) (“[E]very spring, hunters break out their artillery—high-caliber pistols, shotguns, even AK-47s….”); “Shooting Fish in a Barrel,” Sports Illustrated (Apr. 24, 1989) (“From March 25 to May 25, the steely gray surface of [Lake] Champlain erupts with miniature depth-charge explosions….”).

As both articles mention, state authorities in Vermont have been trying to ban the practice entirely since at least 1969, seeing it as “dangerous, anachronistic, and somewhat embarrassing.” It’s not just dangerous to the fish, either, because bullets can ricochet off the water (or rocks), and it’s pretty easy to think of other ways that these bullets could end up in something other than fish. Still, whenever a ban is proposed, hundreds of people protest, and the legislation dies.

I should mention that some of these laws aren’t very clear, which is another reason you should assume the answer to your fish-shooting question is no unless you have received specific (and paid) legal advice to the contrary. Whoever handled the punctuation for the law in Hawai’i should be fired immediately (or at least relieved of punctuation duties), for example. But after struggling with it for a while, it does seem to grant pretty broad permission to use firearms against sharks. Having seen Jaws as a child, my instinct is to say this should be encouraged, but of course that’s wrong. Sharks aren’t evil, they’re just sharks, and for the most part, if you don’t bother them, they won’t bother you. Cf. “Shark-Attack Lawsuit Raises Interesting Questions, Like What Were You Doing in the Ocean to Begin With” (Aug. 10, 2016). Also, some shark species are threatened or endangered, so even if state law doesn’t forbid killing them, federal law might. Again, if one has just sunk your fishing boat, eaten its captain, and is now coming for you, I wouldn’t worry too much about trying to get your lawyer on the phone. But that really doesn’t happen very often.

But since this is one utterly ridiculous legal topic on which I’m not the leading expert, I’ll leave it at that and encourage you to read Michael Smith’s article, “Shooting Fish,” linked above and embedded below. (He also talked about it on a recent episode of the Law Review Squared podcast, which you can download here.) It is terrific.

Cohabitation May No Longer Be Sex Crime in North Dakota

One Wounded in Man-Bat Fracas