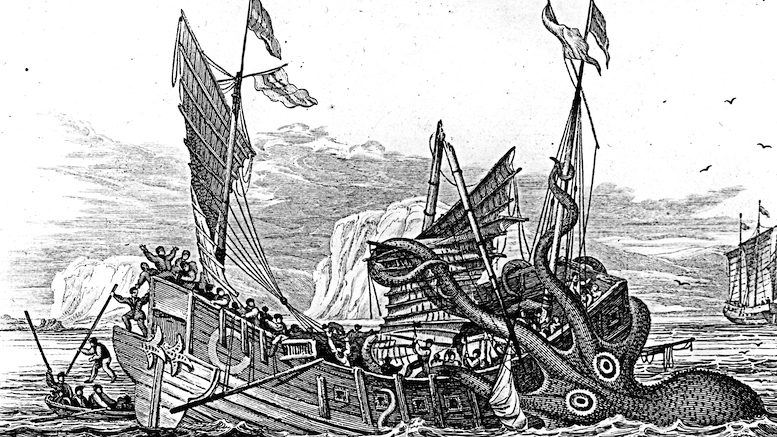 “I’m going to release the Kraken,” Sidney Powell said a while back, meaning not that she literally owned a sea monster of gigantic size and cephalopod-like appearance that she was about to set free, but rather using “Kraken” as a metaphor for an impending lawsuit that would destroy Joe Biden’s claim to the presidency.

The Kraken was later released, but it turned out to be more comical than scary.

As you surely know, given the time you clearly have available to waste, “Release the Kraken!” is a line from the 2010 remake of 1981’s “Clash of the Titans.” It is uttered by Liam Neeson’s Zeus after mortals ignore his warning that he has (1) a very particular set of skills and (2) a Kraken. The Kraken is released, and some bad things happen. Only, there was no Kraken in Greek mythology. There was a sea monster, but it wasn’t a Kraken. That’s a much later Scandinavian thing. There was a “Kraken” in the 1981 movie, which is why there was one in the sequel, but that one looked more like a scaly ape than a squid. Also, the sea monster in the myth (Kraken or otherwise) loses. That’s its role in the story: to get its ass kicked by the hero. In other words, using “Release the Kraken” as a battle cry is factually wrong and makes no sense logically.

So the metaphor actually works pretty well here, though not in the way Sidney Powell meant it.

On Monday, a federal judge in Michigan heard motions to sanction Powell and others involved in one of the many lawsuits demanding that Electoral College votes be handed over to Trump. See, e.g., “Trump Legal Team’s Record So Far: Bad” (Nov. 30, 2020). The state’s motion argued that plaintiffs had “vexatiously multiplied” the proceedings by pursuing frivolous claims, willfully abused the judicial system, and/or acted in bad faith, things that very rarely will get somebody sanctioned, which usually means paying the other side’s attorneys’ fees. The hearing lasted six hours, which I italicize for those who don’t know that this isn’t a good sign for those on the receiving end.

Much of the hearing seems to have involved questions from the judge about the affidavits Powell and others submitted as evidence that some sort of fraud occurred. Ordinarily, a lawyer would talk to the person whose testimony will be in the affidavit, find out what he or she is comfortable saying under oath, and then put that in a document for the person to sign. These guys seem to have considered that optional:

The lawyers largely could not say they spoke with the people who provided the affidavits, something that appeared of concern to [U.S. District Judge Linda] Parker, who used phrases such as “shocks me,” “a little surprising” and “problematic.”

Not phrases you want to hear from a judge hearing a sanctions motion, at least not if she’s looking at you when she says them. Otherwise, they’d be fun to hear. But Powell and the others seem to have heard stuff like this repeatedly. The judge also asked about expert reports that “wildly misstated” voter turnout rates and falsely alleged vote-switching. The attorneys seem to have conceded that the reports were wrong, but argued there’s no evidence they knew that at the time. The other side argued that at best they just didn’t bother to check the facts. “A 30-second internet search, for instance, would have made clear that turnout in Detroit was 51% and not 139%,” for example. Well, who has time?

Also present was Lin Wood, who as you may recall once filed a document that he verified “under plenty of perjury,” and who has not become any more competent since he let that glorious typo slip by. At Monday’s hearing, he insisted that he had nothing to do with the Michigan lawsuit, though he had some trouble explaining why his name is on it if that’s true. (Powell helped out by telling the judge she recalls asking Wood if she could add his name.) A couple hours later, Wood endeared himself further to the court by posting a video clip of the hearing to his Telegram account, a violation of the court’s rules. “Now don’t go and get me in trouble by telling on me with the court,” Wood said to about 800,000 people online, but apparently at least one of them did.

Parker said she’d give the attorneys two weeks to submit additional documents before she rules on the motion. The reports above didn’t say what they’re planning to submit, but they’d probably be better off spending that time and energy trying to rustle up a real Kraken.