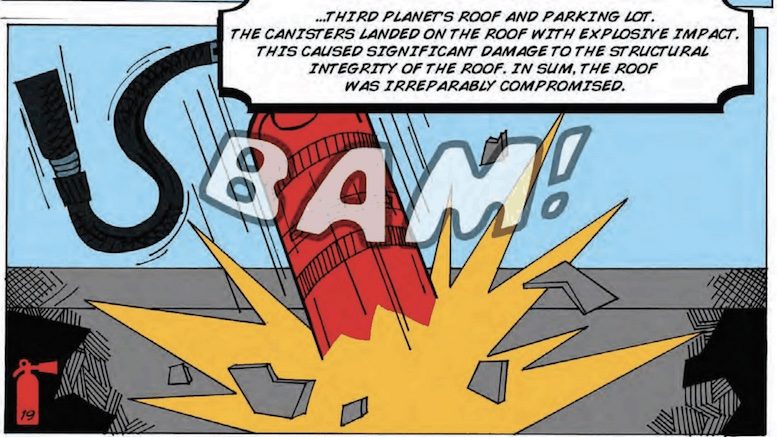 In 2011, Evil Twin Comics released an “All-Lawsuit Issue” that told the “incredible, insane story of [various legal disputes involving] the American comic-book industry.” The following year, Bob Kohn filed a federal amicus brief in comic-book form after a judge limited him to only five pages. So we have been building up to this, maybe, but if there’s another pleading out there that does the comic-book format this well, I’m not aware of it.

This is a petition (complaint) filed by Feldman & Feldman, P.C., on behalf of its client T.J. Johnson and his business, the Third Planet Sci-Fi and Fantasy Superstore in Houston. Johnson is suing Third Planet’s next-door neighbor, the Crowne Plaza River Oaks Hotel, alleging that it bears some responsibility for repeated attacks by hotel guests or visitors, who Johnson says have been hurling projectiles at his one-story business from the hotel’s upper floors for years. Not just cigarette butts, which he says have twice caused fires on the property, but “all manner of items, from ceramic mugs, plates, silverware, and bottles to cinder blocks, luggage racks, and ladders….” On or about March 3, 2019, however, “matters escalated to a new level” when persons unknown “launched at minimum fourteen large metal-canister fire extinguishers” from the hotel onto Third Planet’s property. The petition alleges that the impacts “irreparably damaged” the business’s roof. And that would be bad enough, but:

Anyone who collects or even likes comic books, which Third Planet sells in abundance, would be horrified by that simple sentence used in this context. But, noting that the defendant has previously claimed (I assume in motions to dismiss) that it “could not sufficiently understand the claims and allegations against it” (this is the third amended petition), the plaintiffs say they hope to clarify the facts of the case by “provid[ing] the facts in illustrated form.” Pages 6 through 18 do just that, as you can and should see below.

Plaintiffs are not accusing Crowne Plaza itself or its employees of flinging stuff at Third Planet, but rather arguing that it has a duty to do more to keep those on its property from launching projectiles at the neighbors, and alleges causes of action for negligence, trespass, and nuisance. I express no opinion about the claims themselves, but the petition is terrific.

Gambler Threatens to Sue the Venetian for Bad Feng Shui