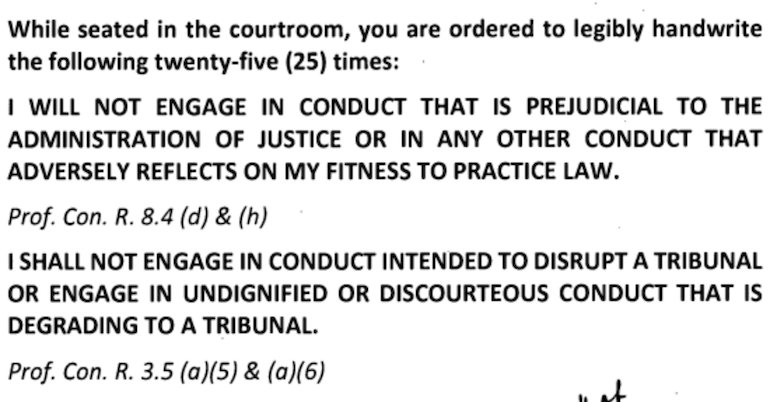 Anthony Baker told a reporter that he had expected to do some jail time when he showed up for his contempt hearing on February 13. He didn’t bring his briefcase, laptop, or house keys, because he figured he wouldn’t need them. As it turned out, all he needed was a pen.

He was probably able to use a credit card for the $500 fine—the pen was to write out the sentences above 25 times each.

Baker got upset during a trial earlier this month after Judge Nancy Fuerst ruled against him on a jury-instruction issue. Baker was representing a man accused of felonious assault and domestic violence (the man was mentioned in the most recent season of “Serial,” if you’re interested in that), and wanted the judge to instruct the jury on self-defense. The judge refused to do that—the defendant was accused of assaulting his wife, and presumably the judge didn’t think the evidence supported a self-defense instruction—and Baker decided to protest:

Fuerst ordered Baker to sit down at the defense table and be quiet, then ordered the jury back into the courtroom, the transcript shows. She began reading the instructions but stopped after just a few sentences because Baker—in front of the jury—got up from the defense table during the jury instructions, left his client sitting there and walked into the holding cell where jailed inmates are kept as they await court hearings, according to the transcript.

Baker admitted to the protest, but denied he actually walked out of the courtroom and into the holding cell. “I moved away from the table so it was clear I’m not participating,” Baker said. But as he conceded, regardless of how far he moved, he was trying to stop the trial from going forward, at least temporarily. If there are any good options for doing that with the jury present, though,  walking around the courtroom and waving your arms probably isn’t among them. The judge held Baker in contempt, and the jury convicted his client on both charges.

According to the report, the contempt hearing on February 13 “lasted less than two minutes,” and it wasn’t because the judge has a trapdoor in her courtroom. Baker apologized, saying he still believed the ruling was incorrect but conceding that “I was totally wrong in how I protested.” Probably for that reason, while the judge fined him $500 she did not take any further punitive action. Except for the sentences.

And there were only 50 of those, far fewer than I generally had to write (in high school, not recently). They were long ones, though, because they were the relevant provisions of the Ohio Rules of Professional Conduct:

Baker said he thought the punishment was fair, and that he had learned his lesson. “It won’t happen again, that’s for sure,” he said. I remember making similar promises, but I think he probably means it.

Judge Orders Defendant to Draw Him

Former Judge Ordered to Send Out Pictures of Herself Wearing Handcuffs

A Festivus for the Rest of Us, or at Least for This Guy

“Safe Surrender” Program Draws Hundreds Not Wanted for Anything

Court Rules Icelandic “Girl” Can Use Her Own Name