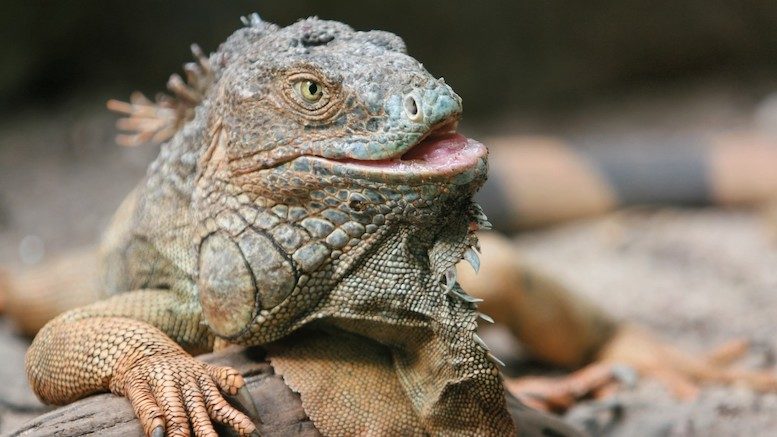 The victim (or a relative, who knows)

A Florida man facing animal-cruelty charges says he was only defending himself from an iguana attack, but prosecutors say the video tells a different story. While the outcome remains to be seen, we know Nilaja Patterson won’t be able to use the state’s controversial “stand your ground” law on this particular set of facts, as the Sun-Sentinel (and CNN, and many others) reported yesterday.

Under the common law, a person has a “duty to retreat,” or try to, before using deadly force unless the target of the force is (for example) trying to break into the person’s home. Because the Florida Legislature changed that rule in 2005, George Zimmerman was able to argue that he shot Trayvon Martin in self-defense, even though Zimmerman wasn’t at home and made no effort to avoid the danger he allegedly believed was posed by an unarmed 17-year-old boy. (Zimmerman was charged with second-degree murder and manslaughter, but was acquitted.) More than a dozen other states have similar “stand your ground” laws.

These laws have been less controversial in iguana cases, probably because, so far as I can tell, there’s never been such a case. But Patterson’s attorneys invoked the defense here in a motion to dismiss. (Although most so-called “news outlets” have failed to provide the relevant documents, this so-called “news outlet” is doing so, which is possible because 15th Judicial Circuit (Palm Beach County) has a pretty good online system. Thank you, 15th Judicial Circuit.)

Let us begin with the probable-cause affidavit. It says that last September, Officer Patrick Prentice responded to a “report of a man seen beating an Iguana” (strange capitalization in original). Upon arriving, Officer Prentice found a three-foot green iguana at the scene, bleeding and unresponsive. He took it to be euthanized, but it died in transit. A necropsy confirmed the patient had died from blunt-force trauma, injuries that a veterinarian opined would have been “painful and terrifying” to the animal. Officer Prentice then reviewed surveillance video of the incident, which we’ll return to in a moment. The charges followed.

In the motion to dismiss, Patterson’s attorneys explained their client’s version of events. He says he was in the park “enjoying the afternoon in the company of friends” when he saw the iguana crossing the street. Concerned for its safety, he retrieved said iguana, after which he “gently set the iguana on the floor [sic] and let it be.” According to Patterson, a crowd then gathered to pet and gawk at the iguana, causing it to become “visibly agitated.” Again thinking of the animal’s well-being, Patterson sought to “calm it” and move it away from the crowd, only to have it ungratefully try to bite him. Yet he persevered, still concerned for the safety of all parties. Though he was eventually able to “briefly gain partial control of the wild animal,” it then bit him on the arm. Thereupon, “Patterson kicked the iguana as far as he could.” But that doesn’t seem to have been very far, or at least not far enough, and it is at this point the story shifts to the passive voice: “An altercation between the Patterson [sic] and the wild beast took place,” after which “[t]he wild beast was left incapacitated.” The Patterson subsequently “received 22 staples on his right arm” (passive voice being perfectly okay there).

The motion then argued Patterson was entitled to immunity under the “stand your ground” law because he was acting in justifiable self-defense when he kicked the iguana as far as he could, and in the altercation that then took place. He “acted in a reasonable manner under all the circumstances,” motivated by safety concerns. Though Patterson admittedly made the first move, “the wild iguana was first to engage with physical violence.” Only after being bitten did Patterson “use[ ] physical force to kick and push the wild beast as far as possible….” The motion doesn’t make entirely clear why the “altercation” took place. I assume Patterson claims the iguana re-engaged, but the motion seems to admit Patterson was the one who followed up: “[N]ot being an expert on the matter, Patterson believed that the iguana could have injected poison in him and thus he rushed to incapacitate the iguana the best way he could in order to preserve its antidote.” (Iguanas aren’t poisonous.) Regardless, because the iguana was first to engage, the motion argues, Patterson was entitled to kill it.

Interesting, the State responded, because the video (which I haven’t seen) is not entirely consistent with this tale. It shows that the iguana “was not bothering anyone,” and not trying to cross the road, until Patterson approached it. He then continued to “taunt and harass” it, causing it to try to “disengage.” Patterson then stepped on the animal’s tail to stop it so he could pick it up, and this is what prompted the bite. After this, the iguana did enter the roadway, but only because Patterson kicked it in that direction and it was trying to get away. Far from trying to save it, the video allegedly shows, Patterson spent most of the next six minutes abusing it, swinging it by its tail, flinging it down, and kicking it at least 17 times.

The video is therefore, the State argued, clear and convincing evidence that Patterson’s use of force was not justified. The iguana bit him only after he “encroached upon its personal space” and repeatedly badgered it. Interestingly, and maybe not surprisingly given the video, the State didn’t spend much time arguing about whether the “stand your ground” defense is even available to an accused iguana-killer. It did say it takes the position that the law “does not even apply to this case because the iguana is not a human being,” but said it would “entertain the motion” regardless. Analyzing the issue would’ve been more entertaining, so I’ll devote at least a couple of paragraphs to that.

It’s true that the statute doesn’t say anything about the target of the force, except for the part allowing deadly force “to prevent the imminent commission of a forcible felony.” Animals can’t commit felonies, although interestingly the State made only the more limited argument that in this case, the iguana “was not attempting to murder or commit any felony upon the Defendant.” So it seems to be leaving the door open for cases involving iguanas with more sinister intent. But again, the rest of the statute doesn’t say anything about the target.

Still, it doesn’t make much sense to say that the deadly-force statute could apply to cases of iguana death, simply because it isn’t illegal to use deadly force against an iguana in Florida—it’s only illegal to do it in a cruel or inhumane manner. In fact, Florida arguably encourages people to kill green iguanas, which are considered an invasive species and can be killed, humanely, “year-round and without a permit or hunting license.” You don’t need an excuse to use deadly force against something it’s not illegal to kill.

Whether because of arguments like these or the video evidence, or both, the judge denied Patterson’s motion. His lawyers told CNN that they planned to “fight this case until the very end.” I’m sure that’s true, although if the video is as described, the “very end” may not be very far off.