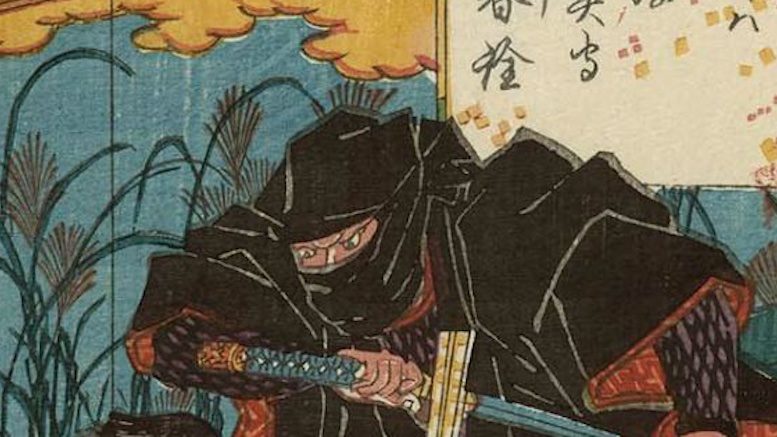 Sneaky (detail from an image by Kunisada, 1853)

According to the U.S. Army, the mission of its 160th Special Operations Aviation Regiment is “to organize, equip, train, resource and employ Army special operations forces worldwide in support of contingency missions and warfighting commanders.” This unit is recognized in particular for its proficiency in operations at night with highly modified helicopters, and is known informally as “the Night Stalkers.” These soldiers are “highly trained and ready to accomplish the very toughest missions in all environments, anywhere in the world, day or night, with unparalleled precision.”

About three weeks ago, some of them had to hide from a ninja named “Gino.”

At about 1:15 a.m. on September 18, officers and deputies in Kern County, California, got a call saying that someone was running around the parking lot of a local airport with what appears to have been a katana or “samurai” sword. “Deputies responded and discovered the suspect had assaulted a victim at the scene,” the sheriff’s office said in a Facebook post, and he had also “thrown a rock through a hangar window, hitting an additional victim in the head.” When located, the suspect “refused to follow commands and brandished the sword at deputies.” Non-lethal projectiles were “ineffective,” but deputies had better luck with a taser. The amateur ninja, who was identified as a 35-year-old man named “Gino,” was taken into custody and charged with at least six crimes, including “brandishing a weapon” and “brandishing a weapon with the intent to resist or prevent and arrest,” which I’m sure is worse than just brandishing one for no reason at all.

It turned out that both victims mentioned above were members of the 160th Special Ops Aviation Regiment, who along with two dozen other soldiers from the regiment were at the airport for training exercises, according to Stars and Stripes. (Several military bases are located in Kern County, including Edwards Air Force Base and the China Lake Naval Air Weapons Station, which is only about 10 miles from the airport where the ninja attacked.) According to reports, a staff sergeant was out smoking a cigarette when “an unknown person wearing full ninja garb” approached him with a question.

“Do you know who I am?” said the unknown person wearing full ninja garb. The sergeant said he did not. “Do you know where my family is?” the man then asked. The sergeant did not know that either. Presumably because the sergeant had not given the correct responses to these coded inquiries, the ninja then attacked him.

The sergeant’s leg was cut, but apparently not seriously. He fled to a nearby building where other members of the unit were located, and they locked the doors and called 911. The ninja continued his assault, reportedly “kicking and punching doors and windows” before hurling a chunk of asphalt through a window, striking another soldier.

As this excerpt from the local police blotter shows, it took some time for help to arrive, which left 26 special operations soldiers renowned for their skill in night fighting “hunkered down in a hang[a]r wondering where help is.”

To be fair, I have no doubt that the Night Stalkers could have handled this guy, even without their helicopters, and probably without any weapons at all. Obviously, there was just no reason to risk it. I do kind of wish this had ended with them pursuing him through the desert in their Black Hawks, but they wisely just stayed put and waited for the police to handle it. I imagine there is some taunting being done by other members of this unit—the ones who did not hunker down in a hangar, held under siege by a single amateur ninja. But that would be totally unfair.

Amateur-ninja attacks have been the subject of previous articles here, though apparently not since 2014. The pandemic may have put a damper on these activities recently, like everything else, but on the other hand, a ninja costume comes with a built-in mask. For an actual lawsuit involving them, we have to go way back to 2006’s “East Texas Ninjas,” a tale that is even more ridiculous than you might think. The most popular ninja-related item here, though, involved a situation opposite to the one described above: the ninjas were the highly trained good guys, and their victims were … not. See “Mugging Outside Ninja School Goes Poorly” (July 2010).

Questions Not to Ask Police, #47