It’s not often that someone screws up so very badly that he must not only apologize to a judge, he must do it in writing, and in fact must do it in pleading form. But Roger Stone managed to do that yesterday, when he posted a photo to his Instagram account showing a judge with crosshairs next to her head, and accompanied the photo with insulting comments to boot: 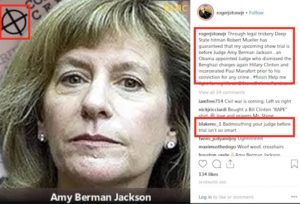 To understand just how far off the normal stupidity chart this is, be advised that this is the judge currently presiding over Stone’s criminal trial, and that she had just imposed a limited gag order on Friday that prevented Stone (and others) from making public statements that might tend to prejudice jurors or otherwise interfere with the administration of justice. Friday’s order didn’t apply to social media specifically, but you’d think Stone would have taken the hint. In fact, it looked briefly like he had. “I am pleased that the judge’s order leaves my first amendment right to defend myself in public intact,” Stone said in a text message Friday to the Washington Post. “I will of course continue to be judicious about my comments regarding the case.”

It is possible he doesn’t know that “judicious” means “having, exercising, or characterized by sound judgment,” at least in the kind of dictionaries normal people use.

Anyway, before the day was out, Stone’s lawyers had—most likely after reading their client the riot act and threatening to withdraw if he was going to keep this nonsense up—put together the document below, entitled “ROGER J. STONE’S NOTICE OF APOLOGY.” Attached to the pleading is a brief and rather odd statement signed by Stone. “Please inform the Court that the photograph and comment today was improper and should not have been posted,” Stone wrote, a classic passive-voice non-apology that blames (1) the photograph and comment for being improper and (2) an apparently unknown person for having posted them. And Stone is reportedly claiming, in fact, that a “volunteer” who runs his social media accounts is to blame. That might explain the first part of the second sentence, in which Stone asserts that he “had no intention of disrespecting the Court”—something that is obviously false if he posted it himself. Stone does get around to an actual apology of sorts, though, concluding with: “[I] humbly apologize for the transgression.”

Seems doubtful he means that, since he apparently reposted the item with the crosshairs removed but with the insulting text still attached. That may have been before the apology was filed, though. In any event, if you’re on trial  for allegedly lying about stuff, it’d be a good idea to tell the truth in any public statements you insist on making. I guess we’ll see how that goes.

Though you’ll hopefully never need it, here’s an example of what a formal apology to the court might look like.

Shrubbery Nice, Not Too Expensive, But Also Not Probable Cause

Defendant Says His Lawyer Lied; Asks Him for Help Remembering What the Lies Were

U.S. Pilot Detained in Rio After Dropping Pants at Checkpoint

Revenge of The Prop Guy