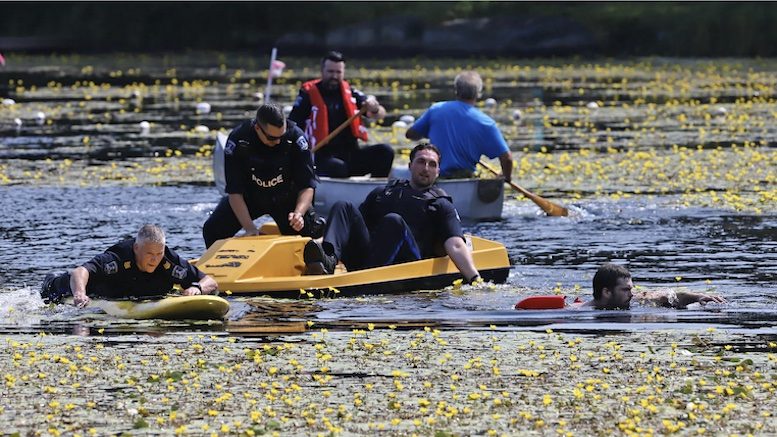 Not much information is available regarding this not-at-all-dramatic low-speed chase in Nova Scotia the other day, but then we don’t really need much, do we?

According to the report, on August 27 two men tried to rob Hugo’s Bar and Grill in Dartmouth, which is just across the bridge from Halifax (or Halifax is across the bridge from it, whichever you prefer). They fled on a motorcycle, but just a few hundred meters away they collided with a police car. It’s not clear whether the chase was already under way at this point or the suspects just had the bad luck to run into a police car, but what we care about here is that the collision was not far from a small lake. One of the suspects was grabbed immediately. The other one, of course, should have just stopped running, but into the lake he went.

Measuring only about 200 meters by 100 (at most), Little Albro Lake seems like more of a pond with delusions of grandeur, but it is apparently big enough that residents do venture out upon it from time to time. At least three of them do, anyway, because as you can see from the remarkably great image above, police commandeered a canoe, a pedal boat, and—what? A paddleboard?

I strongly suspect that the officers realized the canoe would be more than enough to apprehend this suspect, not that they really even needed that under the circumstances. But they may also have realized it would be hilarious if they used not just the canoe, but also a pedal boat and even a paddleboard, just to highlight the pointlessness of the “escape attempt.” I definitely think at least the paddleboard captain is just having a good time.

The report says the man swam around for a while but “eventually started to go underwater,” as in not voluntarily, and was then rescued. In the image above, he appears to be wearing or holding a life jacket, or maybe they just threw it at him, but in another image he is holding onto a rope thrown to him by the crew of the pedal boat. It looks like they towed him to safety, and then of course arrested him.

At the time the report was posted, it said that Halifax Regional Police officers were still on the scene and “the investigation is ongoing,” but I think that means the guy on the paddleboard just didn’t want to come back to shore yet. That’s got to be the most fun he had all day.

How Not to Respond to an Allegation