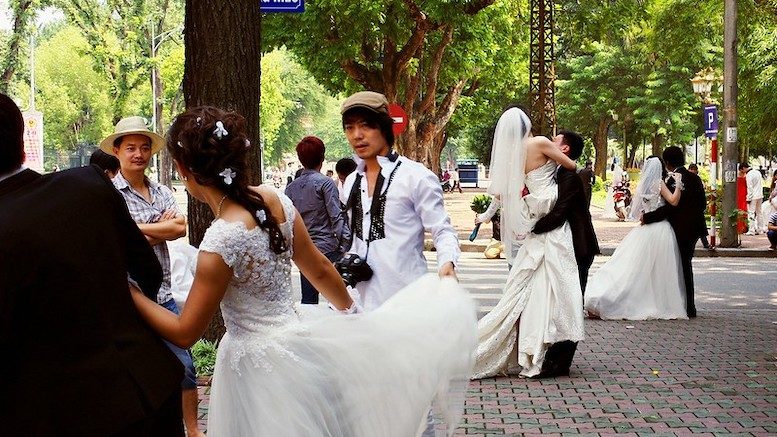 This is in Vietnam, but something similar's probably happening in Taiwan (image: Janne Moren via flickr, CC 2.0)

According to Oddity Central, which cites Newtalk.tw, a couple in Taiwan managed to get themselves an extended paid vacation by taking advantage of a loophole. The applicable regulation requires employers to provide workers who are getting married with eight days of paid leave. It is probably being amended as we speak to include some limitation on the number of marriages within one year that can qualify for this benefit, because the report says that last April, a couple got married four times within a 37-day period so that the husband could claim 32 days of paid leave.

Specifically, they got married on April 6, 2020, and then began their first eight-day honeymoon. On the eighth day, they got divorced and remarried, beginning their second honeymoon. On the last day of that one, they got divorced and remarried again. They repeated this on the last day of the third honeymoon. Eight days later, for some reason not clear to me, they stopped doing this and the husband went back to work.

His employer, apparently having noticed that he’d been gone for an entire month, agreed that he was fully entitled to eight days of paid leave, but it objected to the three honeymoons after that and refused to pay him for that time. Standing his ground, the clerk complained to the Taipei City Labor Bureau—which not only agreed he was right but fined the employer NT$20,000 (US$700) for failing to comply with the law. Standing its ground, the employer appealed, arguing that the clerk’s “malicious abuse of marriage leave” was not legitimate. And according to the reports above, it lost again when the Beishi Labor Bureau ruled in the clerk’s favor on April 10, 2021.

I haven’t been able to find the decision itself (or the “Beishi Labor Bureau”—I suspect “Beishi” is a mistranslation and this is another panel of the Taipei City Bureau), but let us consider the rule, which does exist. It is Article 2 of the Regulations on Leave-Taking of Workers (enacted pursuant to Article 43 of the Labor Standards Act, for those taking especially careful notes, although you should probably stop doing that, and are legally required to stop if you haven’t read my disclaimer). According to the Laws & Regulations Database of the Republic of China (the one on the island), Article 2 states: “On wedding day, a worker shall be entitled to eight days of wedding leave with pay.”

That is pretty straightforward except for the phrase “on wedding day.” Obviously, a worker couldn’t take all eight days “on wedding day,” but we can’t just ignore that phrase, either. It would make sense to interpret it to mean something like, “upon being married,” and that would support the worker’s position. On the other hand, “wedding day” is singular, which suggests you only get it once. On the other other hand, it’s hard to see why a legislature (or agency) would assume that a worker would get married only once during his or her lifetime, or believe that a second marriage at some point shouldn’t entitle someone to a second paid honeymoon. And if they had intended to limit the number of times paid wedding leave was available, they could have done so, like they did in Article 4, which has to do with sick leave. For example, it looks like a worker is entitled to sick leave at half pay as long as that doesn’t exceed “thirty days in one year” (longer if hospitalized). But the rule on marriage leave doesn’t say anything like that.

My guess is that it probably will soon. Article 2 was last amended on January 15, 2019, but I imagine there will be another amendment listed there shortly. In the meantime, if anyone has the ability to monitor the number of weddings and divorces in Taiwan, and preferably to plot the recent numbers on a graph, that would be very interesting to see.

Note: Readers who, unlike myself, actually know something about Mandarin Chinese, think my guess about “Beishi” being wrong is probably right. They say the standard romanization of the characters for “Taipei City” is “tai bei shi,” and that the “tai” probably disappeared in translation (transliteration?) somewhere. So it seems likely that this second ruling was by some sort of appellate panel within the same Taipei City Bureau, or that there was only one ruling to begin with and the reports morphed it into two somehow.

“A Manson Wedding Did Not Take Place”

Best Friends Allege They Were Fired After Swapping Wives

Note to Self: Cancel Credit Cards So Ex Cannot Use Them to Hire Hit Man