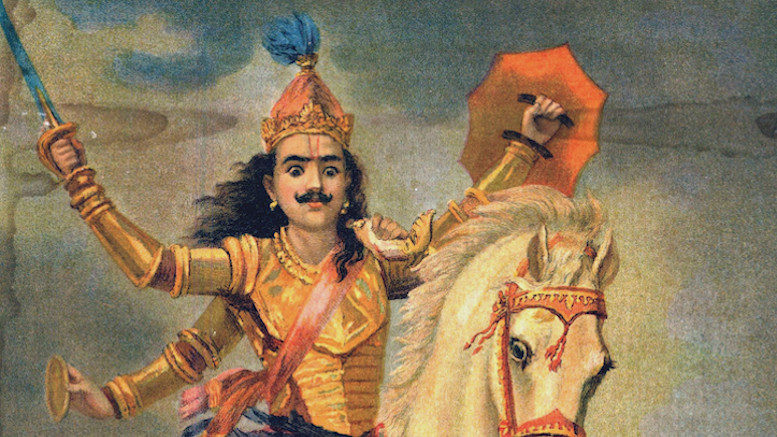 You can't do this stuff at work (Kalki, 10th Avatar of Vishnu, by Ravi Varma)

An official in the Indian state of Gujarat is in trouble because he has only worked a few days during the last eight months, but he explained this week that he was unable to come in to the office because he is the tenth incarnation of Lord Vishnu and he’s getting more work done at home.

“Even if you don’t believe it,” Rameshchandra Fefar told the (apparently skeptical) media on Friday, “I am indeed the tenth incarnation of Lord Vishnu and I will prove it in coming days.” (If he told them how he would prove this, or when, the report did not explain.) Fefar said he had realized he was the god’s 10th avatar, Kalki, while in his office in March 2010, and he had finally decided he couldn’t keep wasting time commuting when he could have been putting his divine powers to better use from home.

Fefar explained this to his employer in response to a “show-cause notice,” which I believe is a notice that your employer would like you to show cause why you shouldn’t be fired, because, as far as they can tell, you haven’t been doing any work. He has been working, he said, and it’s important work. “I am doing penance at home by entering into [the] fifth dimension to change the global conscience,” Fefar told the employer. “I can’t do such penance sitting in my office.”

The report didn’t say exactly what this “penance” was, or why Fefar couldn’t do it at the office like the rest of us do. I suppose there could be a translation issue. Maybe he said he was “into The 5th Dimension,” the American popular music vocal group that had several hits in the 1960s and 1970s including “Aquarius/Let the Sunshine In” and “Wedding Bell Blues,” and meant that as Lord Vishnu he wishes to bathe in the group’s transcendent harmonies to strengthen him while fighting to protect Dharma, and he can’t do that at work because people keep bitching about the noise.

Or, more likely, he said he’s not into The Fifth Dimension, which would explain why he considered listening to their music “doing penance.” There are worse kinds of penance, but if you don’t like a certain kind of music it can be awful to be subjected to it. I noticed that according to Wikipedia, in November 2017, the current incarnation of The Fifth Dimension “appeared for 18 performances at the Andy Williams Performing Arts Centre in Branson, Missouri, in the Andy Williams Christmas Extravaganza hosted by Jimmy Osmond,” and sitting through that would sure seem like penance to me.

But whatever it is Fefar is doing in the fifth dimension, or with The Fifth Dimension, it’s way too important to blow off just because somebody wants him to come into work more often. For one thing, his divine powers are making it rain, and you don’t want that to stop, do you? He did seem to suggest that he would start coming in more if his boss absolutely insisted on it, but didn’t think it would be a good idea. The agency should think about the potential consequences, he said, and decide “whether it’s more important … to make me sit in the office and [let] time pass or [to let me] do some concrete work to save the country from drought.” I can recall saying similar things in one or more of my evaluations over the years, to be honest, although not the rainmaking part. I hope this argument works better for him than it did for me.

Board Strikes Down Rule Requiring Employees to Be “Positive”

FBI on the Trail of the “Good[-]Grammar Bandit” [Updated]