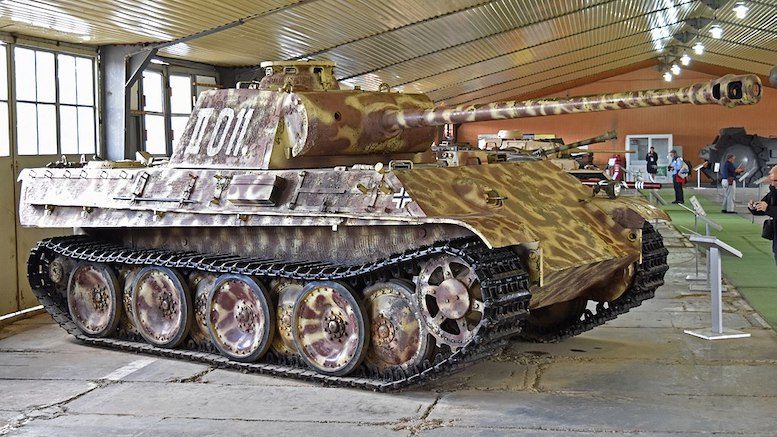 A Panzerkampfwagen V "Panther" tank (in a museum) (image: Alan Wilson via Flickr)

The good news here is that the owner of this particular tank wasn’t driving it anywhere, for example (1) home from the local pub and/or (2) towards Poland, when authorities showed up in 2015. It was just sitting in what some reports call a “garage” but others, almost certainly more accurate, call a “subterranean bunker.” Authorities had been tipped off that a 78-year-old resident of Heikendorf (near Kiel) might have Nazi-stolen art stashed away, but that tip turned out to be false. While they were on the premises, though, they noticed that the man did have, among other things, some machine guns, a mortar, assault rifles, an 88mm anti-aircraft gun, a torpedo, and a 40-ton Panther tank.

It is not illegal to own these things in Germany, as long as one obtains a license under the War Weapons Control Act (Kriegswaffenkontrollgesetz). That Act applies to nuclear, chemical, and biological weapons (and licenses will not be forthcoming for those), as well as a wide variety of handy items such as rocket launchers, combat aircraft and helicopters, submarines, torpedoes, flamethrowers, and “laser weapons specially designed for causing permanent loss of eyesight,” which seems to leave a lot of room for other kinds of laser weapons, frankly.

The Act states that a license may be denied if there is “a reason to assume its granting would militate against the interest of [Germany] in maintaining good relations with other countries,” or if the applicant or others involved in the transaction are not German nationals. A license shall be denied if, for example, “there is a danger of the war weapons being used for an act detrimental to peace, especially for a war of aggression.” This is presumably meant to keep arms dealers from selling weapons abroad, not to keep individual 78-year-olds from invading Poland. But for whatever reason, this tank owner had never applied for the necessary license(s), which became a significant problem for him when the army showed up in 2015.

It appears that all of his items dated back to World War II, and that all had been “demilitarized,” meaning they could no longer shoot and/or blow things up. That’s not entirely clear, though, because the reports also say that authorities seized “more than 1,000 rounds of ammunition,” and I don’t think you need ammo for guns that will never shoot again. Also, according to this report, an expert said that although the tank’s gun barrel was corroded, it “could be cleaned within a few days.” Regardless, without the necessary license(s) his items were subject to seizure, which meant that 20 soldiers had to spend nine hours extracting the gentleman’s Panzer from his subterranean bunker. The engine had been restored but the tracks weren’t installed, so they couldn’t just drive it out.

After a proceeding that for some reason took seven years, on August 3 the prosecution and defense agreed on a deal that yielded a suspended sentence and a fine of 250,000 euros. The man also agreed to find a museum to take the tank and anti-aircraft gun within the next two years, and to apply for licenses for everything else if he wants to keep them. I suppose the torpedo doesn’t pose much of a risk without its warhead, so maybe he can put that over his fireplace or something.

The man previously claimed to have bought the tank in England as “scrap metal,” although my guess is that you could find 40 tons of scrap metal in Germany without having to look abroad for a tank-shaped piece of it.

Legal Tool of the Week

A Tort Causation Puzzler for You