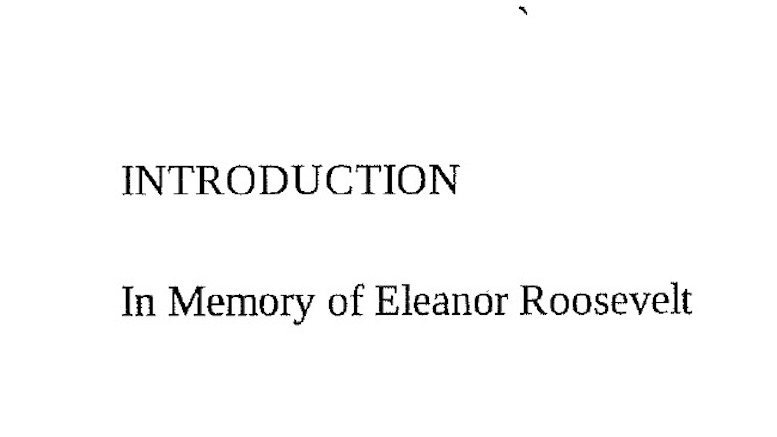 Are promises once made to Eleanor Roosevelt now enforceable? Stay tuned.

That’s actually just one of the many claims made in this remarkable complaint, filed in Delaware federal court on August 24 and mentioned today by Duke University’s The Chronicle (among others, like you, Ryan). I would ordinarily devote much more time and space to something this good, but I am getting ready for a hearing tomorrow. I’m glad this circulated today, though, because it’s given me lots of great ideas to throw out there. Surely at least one of them will stick.

According to the complaint, the plaintiff applied to at least 24 law schools, or tried to, but was not admitted to any. While there may well have been other reasons for that, it was enough that Plaintiff had refused to take the LSAT, which most if not all schools require. What was his objection to the LSAT?

The LSAT is based on ideology rather than science, and is planned, organized, coordinated, budgeted and administered by radicals who ignore our law, our history, our culture, ethics and probably all of western civilization law.

The lawsuit seems to have been triggered by a letter from Duke University saying the June LSAT was the last opportunity to get a score for purposes of 2018 admissions, and since Plaintiff had not taken it, Duke wouldn’t process his application. Plaintiff sued Duke and an assortment of other defendants, including the Law School Admissions Council (probably the radicals mentioned above), Harvard, the ABA, the Pennsylvania and California state bar associations, and various officials affiliated with the foregoing, as well as Betsy DeVos, who for some reason he seems to associate with education.

Plaintiff seeks many millions of dollars and an order admitting him to practice law in Pennsylvania.

What exactly did the defendants do wrong, you are probably asking. Well, first, the ABA has apparently broken a promise it made to Eleanor Roosevelt in 1947 to the effect that it and its members would comply with the Universal Declaration of Human Rights. (Which was adopted in 1948, but it could have promised her before that.) Beyond that—not that anything else is really necessary—Plaintiff alleges that not admitting him to law school constituted various torts including trespass, “trespass on the case,” intentional infliction of emotional distress, bad faith, trover (!), and the best of the formal causes of action, “failure to provide a Republican form of government.”

Not that kind of “Republican form of government.” Here Plaintiff is referring to the Guarantee Clause. U.S. Const. art IV, § 4, which requires the federal government to “guarantee to every State in this Union a Republican Form of Government” (capitalization theirs) and protect them from invasion and insurrection. If I had more time, I could—no, never mind, no matter how much time I spent on this one I couldn’t figure out how the defendants allegedly violated that. This and all the other causes of action clearly state, though, that “[t]he damages claimed are all a result of the injuries,” so they must have done something wrong.

Plaintiff may be one of those “sovereign citizens,” or at least influenced by them, judging by his assertion that this matter will be governed by the “Law of the Case,” which he has helpfully attached as Exhibit 1. There we learn, among other things, that the California Constitution of 1879 “defines all California courts to be courts of record,” which it probably does, but that doesn’t seem especially relevant. We also learn that the “Commonwealth of Pennsylvania maintains confusion and deception with multiple versions of its Constitution,” and that may also be true, but again, seems irrelevant. The Law of the Case will also apparently be found in Black’s Law Dictionary, Barron’s Canadian Law Dictionary, and, of course, Article 34 of the Magna Carta.

We don’t need to go into that one, really, although I would very much like to. The Magna Carta didn’t have “articles,” for one thing, and while some would argue that technically a few of its clauses are still part of English law, at least, clause 34 isn’t one of them.

He might be thinking of clause 33, that historic and foundational provision stating that “[a]ll fish-weirs shall be removed from the Thames, the Medway, and throughout the whole of England, except on the sea coast.” Or at least he might as well give that one a try, because it’s just as likely to work as his other arguments.

Attorney: “The Training I Received at Hustler Was Extremely Helpful” in Law School

Federal Government Learns There is “Obscenity” on Internet; Is Sort of Prosecuting It