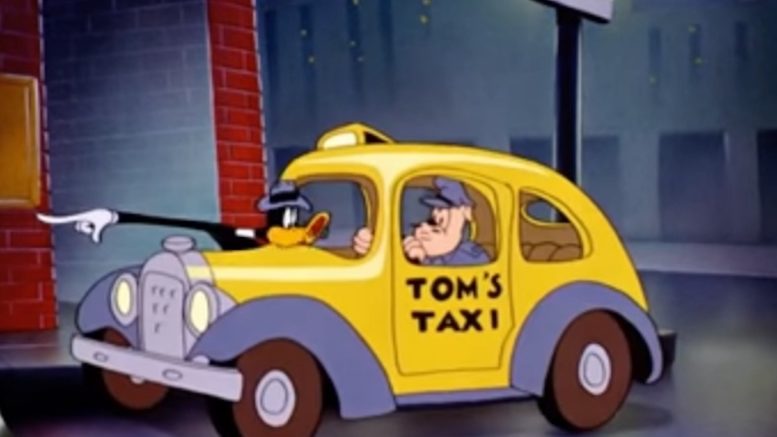 Follow that car! (still from The Great Piggy Bank Robbery (1946))

“Surveilling public officials is not what we do,” board members of the Justice Centre for Constitutional Freedoms said in a press release last week. But what it meant was, “it’s not what we do anymore.”

To be fair, the board of directors may not have known about this. But the group’s president and founder, John Carpay, admitted that he had indeed hired a private investigator to surveil a public official, namely Mr. Glenn Joyal. Glenn Joyal, as it happens, is the chief justice of the Manitoba Court of Queen’s Bench. At the time he was under surveillance, as it happens, he was presiding over a case in which JCCF was a party.

JCCF represents churches in Manitoba that are challenging the government’s ability to impose public-health orders during a pandemic, arguing for example that orders forbidding large gatherings may interfere with freedom of religion or expression. It is certainly true that such orders may do that, and government has to be sensitive to such concerns. On the other hand, another thing that may interfere with freedom of religion or expression is being dead, so that’s also a relevant concern. In any event, JCCF’s case has been pending before Chief Justice Joyal, who had not yet issued his ruling at the time one of the parties put him under surveillance.

Now, some of you non-lawyers may be asking, Kevin, is that a good strategy? If I am a party to a lawsuit, should I, too, hire a private investigator to follow the judge around while the case is pending? You never know what you might find out. Would that be a good thing to do? Here’s some free advice of the kind I am known for: NO.

Most lawyers, of course, would never ask such questions, because not only are lawyers “officers of the court” with a responsibility to be just and fair and forthcoming at all times, they are subject to rules of professional conduct that expressly prohibit things like dishonesty, filing frivolous lawsuits, trying to interfere with the administration of justice, and especially doing all of the above at the same time. Maybe more to the point, most lawyers would never ask such questions because they know that if somebody heard them doing it, that witness’s testimony might be admissible against them later under an exception to the hearsay rule. Either way, my advice is the same: NO.

One person who could have used this advice is John Carpay, who is a practicing lawyer—for now—and yet hired a private investigator to put a province’s chief justice under surveillance.

I guess another piece of relevant advice that someone (not me) might give here is that if you’re going to hire a private investigator to put a chief justice under surveillance—and just to be clear, you should not do that—you better hire one who knows what he’s doing. I say this because the surveillance came to light after Chief Justice Joyal spotted the guy following him:

Joyal said he realized he was being followed by a vehicle on July 8 when leaving the Manitoba law courts building in downtown Winnipeg and driving around the city.

The CBC reports don’t make it clear how this played out. Most likely, Joyal reported this to the police and they investigated. But I like to think that not only did he spot the tail himself, he then turned the tables with some fancy driving and ended up following the investigator, so that when the guy sent a kid to the front door, the reason no one was home is that the chief justice was sitting in a car down the block, watching the whole thing from under the brim of a fedora.

But probably he just called the police.

However it came about, the chief justice revealed that the jig was up at a hearing the following Monday. It appears police had identified the relevant PI agency, but it had refused to reveal who hired it. “After a break in the hearing,” during which at least one interesting conversation must have been held, Carpay admitted to the court that JCCF had hired the agency. He later said in a statement that he alone was responsible.

He also insisted, however, that “[i]n no way was this intended to influence or impact … any of our court cases,” such as the one in which Justice Joyal was then presiding. He explained that, in fact, he had put multiple government officials under surveillance, in an effort to catch them violating the same health orders they were imposing on the public, the orders JCCF was challenging in court. The point, he said, was simply “to hold government officials accountable.”

Well, that might make sense for executive or legislative officials, who actually make policy and are more directly accountable to voters. As long as you’re only observing what they do in public, they would probably have no reasonable expectation of privacy, and hypocrisy might be relevant. But judges don’t really make policy and aren’t directly accountable in the same way. Trying to embarrass them could easily be seen as an attempt to obstruct justice, in fact. And regardless, following any of these officials home is a very bad idea.

Further, we aren’t talking here about a reporter, for example, but a lawyer who has obligations to the court, and more specifically a lawyer who put a judge under surveillance while he was representing a client before that very judge. And just the one in this particular case: “No other judges were included.”

That in particular might make it seem like the intent was “to influence or impact … [one] of our court cases,” but like I said, Carpay denied that. Joyal was not deliberately targeted, he said in the statement, it’s just that “[i]n an error of judgment, Chief Justice Joyal was included with the observation of government officials.” Because he used the passive voice, I guess we’ll never know who made that decision. Except that he forgot to use the passive voice in the sentence just before that one, in which he said he had apologized to the Chief Justice for “my decision to include him” in the surveillance program.

His private investigator got spotted, and his public-relations person used the active voice? These are some poor hiring decisions.

Unsurprisingly, Carpay is now on “indefinite leave, effective immediately” from JCCF, and is facing a bar investigation. “Lawyers across Canada were shaking our heads in disbelief,” said a law professor at the University of Alberta, which is probably a figure of speech although I like to imagine that lawyers across Canada all joined a Zoom conference to discuss the matter and shake their heads about it. Another lawyer was quoted as saying this could be bad for JCCF’s continued nonprofit status. “A very basic concept,” he said, “is that a Canadian registered charity in Canada operating here is not allowed to break the law.” It’s even more basic than that, I think, but you usually don’t have the opportunity to edit your quotes, so I’ll cut him some slack.

The only other thing I know about Mr. Carpay is that, according to the CBC, he “has previously made headlines for comparing Nazi swastikas to LGBTQ pride flags,” a comparison that is too stupid to require further comment.

Good Reason to Kill #48: Asked Wrong Question After State of the Union

If Great Literary Works Had Been Written by Lawyers