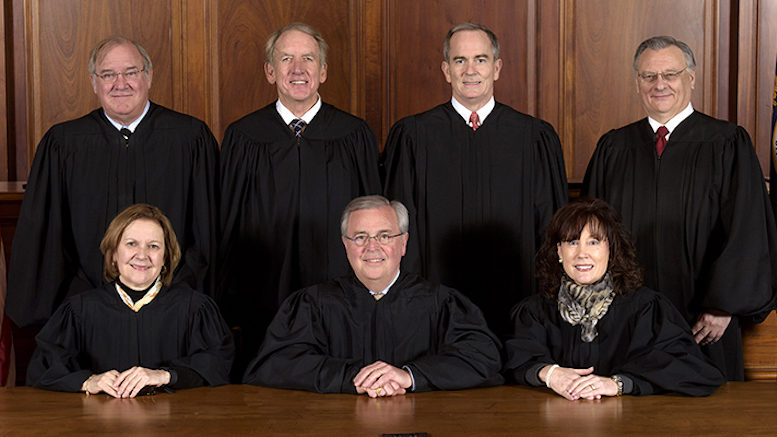 Many reasons, in fact.

Deters was supposed to stop practicing law eight years ago, when his license was suspended. But he kept doing it anyway, according to the Kentucky Supreme Court, which recently rejected his latest request to be reinstated. And because he apparently kept on doing it even after that, he might now be facing jail time for contempt.

He was admitted to the Kentucky Bar in 1986, and may or may not have practiced without incident for the next 15 years. I doubt those 15 years were uneventful, but in its opinions discussing him (six, for now) the Kentucky Supreme Court only mentions charges going back to 2002. See, e.g., Kentucky Bar Assoc. v. Deters, 406 S.W.3d 812 (Ky. 2013); Kentucky Bar Assoc. v. Deters, 360 S.W.3d 224 (Ky. 2012). Those charges included things like making false statements about judges, failing to turn over settlement funds, and filing papers on behalf of someone he didn’t actually represent. It’s hard to figure out exactly how many charges he faced, but at one point there were at least nine different disciplinary matters pending against him at the same time.

Does it seem like this person should be hard to stop? Read on.

In 2012, the court suspended Deters for 60 days. When he applied for reinstatement later that year, the Kentucky Bar advised against it, but the court did not heed that advice. That’s why it had to suspend him again in 2013, this time for making false statements to a tribunal. Deters applied for reinstatement later that year, too, but according to the court he withdrew the application after he was told the bar had conducted interviews with federal judges, state judges, and lawyers in the area, who, it turned out, “held an overwhelmingly negative opinion of Deters and the manner in which he practiced law.” The 2013 suspension therefore continued.

And, apparently based on other still-pending charges, the court suspended him again in 2015, this time for making frivolous claims. The court noted his “lengthy disciplinary history” (well, what it then believed to be a lengthy disciplinary history) and said that despite multiple punishments, “it appears Deters is undeterred” (pun probably intended). So now Deters was double-suspended. Or at least he was until 2016, when the court suspended him again based on multiple charges pending in two other cases. Now triple-suspended, or maybe with three suspensions running concurrently, Deters had certainly learned his lesson at this point.

That’s what he said later that year, anyway, when he sought reinstatement for the second time. After a review that lasted well over two years—although to be fair, they had a lot of reading material to get through—the Kentucky Bar again recommended denying his application. At this point (late 2019), the court was more receptive. It reviewed the record and the bar’s report, and after doing so, in what I think it’s fair to say didn’t bode well for Deters’ request, the court ordered him to “undergo a full psychological examination.”

Friends, nobody’s perfect, and many lawyers will have some sort of brush with the world of legal ethics during the course of their careers. But most of us do, at a minimum, try to conduct ourselves in such a way that no court will consider it necessary to order us to undergo a full psychological examination just because of the sheer number of ethics rules we’ve repeatedly broken. This is a relatively rare event. Please try to keep this in mind.

Deters met with a psychologist who later testified before the court. This person reported that on the one hand, Deters appeared to be “an intelligent man who does not have a clear[ly] diagnosable mental health condition, who does not abuse substances, and who does not have neurocognitive issues that would impair functioning,” and therefore seemed to have the “capacity to follow all legal and ethical guidelines relevant to and pertinent to the practice of law in the state of Kentucky” (thus answering the court’s question). On the other hand, he was a total dick. Sorry, I’m paraphrasing there; the report explained that while Deters had the capacity to follow the rules, “his willingness to do so … remains to be seen.” He did not believe he had actually done anything wrong, the report said, and his histrionic and narcissistic “personality disorder features” might well be “obstacles.” But Deters was “capable of ethical conduct,” the report concluded, “if he chooses that path.”

That brings us to the Kentucky Supreme Court’s opinion of June 17, 2021 (see below), in which it considered the full record along with this report to determine whether Deters’ license should be reinstated after an eight-year suspension. I will now summarize the court’s findings on four pertinent factors.

See, when your license is suspended, you’re not supposed to keep practicing law. Deters testified that what he had been doing at the Deters Law Firm since 2013 was not practicing law, but simply managing or clerking or something like that. But since the record showed Deters supervised associates, hired and fired attorneys, made compensation decisions, and met with clients and other attorneys during this time—you know, stuff that lawyers do—the court agreed he had been “acting in a fashion beyond what [is] permissible for a suspended lawyer.”

Deters seems to have argued that he was covered because he “transferred the firm to his father” after he was suspended. But he kept doing what he was doing, and the firm kept paying his salary, which averaged about $250,000 a year. He testified that these weren’t salary payments, just “interest-free loans that were considered accounts receivable.” Were there any accounts receivable in his name listed on the firm’s tax returns? Nope.

Deters also continued to run advertisements that suggested he was licensed, according to the court, which is also not something you’re supposed to do if that isn’t actually, you know, true.

It’s enough to note here that the court found he didn’t even tell the truth on his reinstatement application. For example, the application asks whether one has ever failed to pay federal or state taxes. He said “no,” but his credit report said “yes” (it showed liens for unpaid taxes). The application asks whether one has ever been charged with “fraud or other acts of dishonesty in any proceeding.” He said “no,” which is just a remarkable answer when the court that will be reviewing the application has already suspended you twice for acts of dishonesty. Deters also failed to disclose litigation he had been involved in during his suspension, including one case in which he was charged with malpractice (when he wasn’t supposed to be practicing at all).

So no, the court held, the record does not show he’s trustworthy.

Pro: Deters was able to show he had fully satisfied all continuing legal education requirements. Con: pretty much everything else. In particular, the court found itself “unable to ignore” certain recent behavior suggesting Deters would not follow rules going forward, but instead would continue the overly aggressive and disrespectful approach to litigation for which he had long been known. This behavior included filing frivolous lawsuits against a witness in the bar proceeding and an Ohio judge who had jailed him for contempt after he violated a gag order. Then there was the conclusion to a brief he filed last December objecting to the bar’s negative recommendation. It said this:

[The members of the committee] are jokes of human excrement who [sic] I refuse to allow to sit in judgment of me. They can all go straight to hell. They couldn’t do what I do for a day. Yet, they judge me? They may judge me because of their positions, but they can’t stop me from what I do, will continue to do and what I say publicly about them. I have EVERY right to be pissed off and EVERY right to speak out.

Emphasis added. Deters certainly does have the right to speak out, but that right is not absolute, especially in court documents, in which the phrase “jokes of human excrement” is rarely appropriate. “This filing speaks volumes [about] Deters’ inappropriate ‘no holds barred approach’ to law practice,” the court remarked, which seems fair.

Those are the court’s capital letters, not mine: “Deters has NO appreciation of the wrongfulness of his prior misconduct, possesses NO contrition for that misconduct, and has NOT rehabilitated himself from past derelictions.” (It probably used a much larger and more ornate font for the NOs originally, but Westlaw just put them in capital letters.)

From the court’s conclusion:

Deters’ lack of self-awareness is utterly amazing. Deters fails completely to make any attempt to fit his application for reinstatement within the framework required …. Deters alleges the KBA, and perhaps we, have different rules for him…. We reject any such claim…. Everyone knows aggressive lawyers who zealously advocate for their clients. Not only is this permitted, but … we expect a lawyer as advocate to “zealously assert the client’s position under the rules of the adversary system.” … What Deters fails to understand is that the adversary system, and our profession, is governed by rules. As we understand Deters’ concept of the practice of law, no Rules of Professional Responsibility, no statute, no case law bind him. Deters’ practice of law is not governed by constitution, rule of law or procedure. It is anarchy…. Citizens and, in particular, attorneys are not permitted to pick and choose which laws they wish to obey.

Application denied, Deters ordered to “cease any and all activities related to the practice of law.”

But wait, I hear you saying. That didn’t say anything about contempt. I thought you said he might be held in contempt. Indeed I did. And if you think Deters complied with even this order, you have not been paying attention.

In October, the Louisville Courier-Journal reported that Deters was not only still operating the Deters Law Firm, he was “masterminding” two federal lawsuits (he’s trying to block vaccination mandates for health-care employees, because of course he is). And so on October 20, the state bar moved that Deters be held in contempt for violating the June order. You remember—that’s the order discussed above in which the court held he had been violating its 2013 order for the last eight years, and told him not to do it again? Yep, that one.

On November 2, Deters filed a response, and that’s where he told the Kentucky Supreme Court that “no one can stop me from doing that.” Again, by “that” he meant practicing law. True, this court has already told him to stop multiple times, and for a decade he’s just been ignoring its orders. This is why I think he might be seeing the inside of a jail cell, and/or a large fine, in the near future. At least, that’s what I think the court should do if it wants people to respect its authority and—I know this is a quaint idea—the rule of law. At this point it almost seems like Deters doesn’t respect either one.

His repeated references to the justices of the court as “the Seven Dwarfs” also seems disrespectful, but I don’t think he’s actually done that in court papers. I could be wrong.

Sanctions Order Against Kraken Lawyers Weighs More Than a Pound