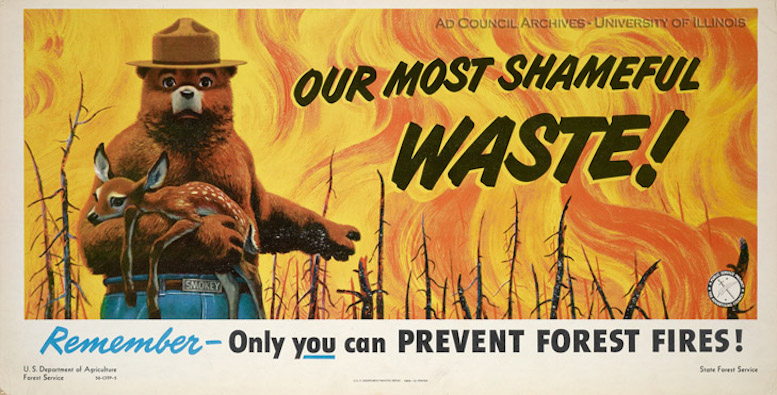 A depiction of Smokey Bear in 1949, my use of which would arguably have been a crime until recently (image: Univ. of Indiana Ad Council archives)

Until very recently, this was the law in the United States:

Yep, it was a federal crime, punishable by up to six months in prison and a fine in an amount I’m not going to look up, but which was too high, to use the character or name “Smokey Bear,” knowingly and for profit, without authorization. But that is no longer the case.

Congress may have been unable to get you another stimulus check this year, among other failures, but it did manage to do this for you. 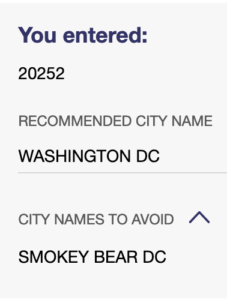 I infer it from this

The concept of Smokey Bear—not, as some would have it, “Smokey the Bear”—has been in use by the government since 1944, when the Smokey Bear Wildfire Prevention campaign was created. In 1950, a bear cub saved from a forest fire in New Mexico was named “Smokey” and donated to the National Zoo. There, according to the government, he received “so many letters he had to have his own zip code,” which sounds like the kind of thing that’s a great story but not actually true, though in this case it is probably true. Regardless, Smokey’s notoriety eventually “attracted commercial interest,” as the government puts it, and to put a stop to that, the unauthorized for-profit use of the character or name was criminalized in 1974.

Why was it necessary to make this a crime? Well, you could ask Sen. Herman Talmadge (D-GA), who sponsored that legislation, except that he’s dead. (If you were to raise his spirit for a conversation, I think this should be your second question, after “has your time in Hell caused you to rethink being a racist,” but the order is up to you.) We can all probably agree that Smokey Bear should be protected from exploitation to some extent, but it seems like that could be done via intellectual-property law. In general a “work of the U.S. Government” can’t be copyrighted, though the government can hold copyrights that are transferred to it. 17 U.S.C. § 105. But the government can hold trademarks, and in fact the U.S. Forest Service has owned the trademark “Smokey Bear” since 1952. It’s not clear to me why that wouldn’t be sufficient.

I did find a handful of cases involving this statute, but none involved an actual prosecution; one held it was unconstitutional as applied, and in another case Justice Scalia made fun of it. See Harmelin v. Michigan, 501 U.S. 957, 987–88 (1991) (rejecting Eighth Amendment “proportionality” challenge to life sentence; noting that Congress provided same penalty for “assault by wounding” that it did for unauthorized use of “Smokey Bear”); Smokey Bear, Inc. v. United States, 31 Fed. Cl. 805 (1994) (denying defendant’s motion to dismiss plaintiff’s claim that it breached license agreement); Lighthawk, the Environmental Air Force v. Robertson, 812 F. Supp. 1095 (W.D. Wash. 1993) (holding statute and regulation was unconstitutional as applied to political ad that depicted a chainsaw-wielding Smokey Bear). So, it seems unlikely this has ever been used, or that it is even necessary.

To his credit, Rep. Steve Chabot (R-OH) has been trying to get this prohibition repealed for years, dating back at least to the 114th Congress, when he sponsored what was then the “Clean Up the Code Act of 2015.” Though it had bipartisan support, the bill went nowhere at that time. Nor did later versions succeed. But you know what might work? Sticking it inside a different and much gianter bill that nobody will even have time to read, and yet will pass anyway because to not pass it would be a complete disaster. And that, my friends, is exactly what happened.

The “Clean Up the Code Act of 2019” became—let’s see here—Title X of Division O of the Consolidated Appropriations Act of 2021, which was signed by the semi-President on December 27. Division O had 14 titles, and was one of 32 divisions in that bill, which was 5,593 pages long.

It is two of those 5,593 pages. One of them repeals nine provisions of the U.S. Code, and the other amends the table of contents accordingly. It decriminalizes not just the unauthorized use of Smokey Bear, but also of “Woodsy Owl,” the emblem of the 4-H clubs, and the Interior Department’s “Golden Eagle Insignia,” as well as—and this is true—the coat of arms of the Swiss Confederation. It also is no longer a crime to knowingly transport water hyacinths (18 U.S.C. § 46), to affix a theft-prevention decal to a motor vehicle without authorization (18 U.S.C. § 511A), or to transport dentures in interstate commerce if you are not a licensed dentist (18 U.S.C. § 1821).

Of course those are all important provisions, but Congress also crammed in funding for a federal horse-racing program, $700 million for Sudan, and some nice words about the Dalai Lama, which is all potentially fine but could have been done separately, perhaps. The bill also kept the government going, authorizing $2.3 trillion in spending, including $900 billion in pandemic relief, so there is that.

Again, you will still need a license to use Smokey Bear, or Woodsy Owl, and maybe also the coat of arms of the Swiss Federation, it’s just that you will no longer face federal criminal charges for doing this without authorization. To the best of my knowledge, you are now entirely free to transport dentures in interstate commerce, but as always, seek legal advice (the kind you pay for) before taking action.

Burglar Says He Was Trapped In Home By “Supernatural Figure”