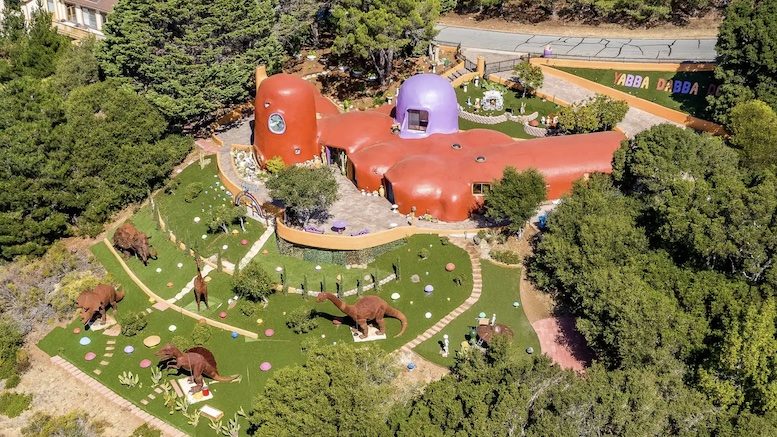 How to upset an HOA (image: Jim Maurer via Flickr, CC2.0)

“I see any dinosaur, I buy it,” Florence Fang said a couple of years ago, and she has plainly visited at least one but not more than five locations from which she was able to see a 15-foot-tall dinosaur statue. These now grace her yard in Hillsborough, California, along with a variety of other objects and figurines including a Bigfoot, some pigs, and two pterodactyls, as well as near-life-size statues of Fred, Wilma, Barney, Betty, and one (1) Great Gazoo. The home itself could also be described as non-standard—reports generally use the word “bulbous”—and it is known locally as “the Flintstone House.”

Neighbors apparently have a number of other words for it.

The town has never been happy with Ms. Fang’s Flintstone House, and in 2019 it sued her, alleging the place was a public nuisance and that many of her improvements (or as the town likely put it, “improvements”) were made without the necessary permits. She counter-sued. Reports this week say the case settled in April, but got no publicity until now because of a confidentiality provision (which obviously did not fully succeed).

Hillsborough is a wealthy community halfway between San Francisco and San Jose, and is known for its architecture, which includes a Hearst family property known as the “Western White House,” a 98-room Beaux-Arts chateau, and a building designed by Frank Lloyd Wright. In 1976, those were joined by the Flintstone House, designed by architect William Nicholson, whose plans called for a Modernist structure created by spraying concrete over a structure molded from rebar, wire mesh, and giant aeronautical balloons (hence its bulbousness). The result is … unique, especially in Hillsborough.

At the time, the town did not have an architectural review board with the power to enforce design standards. Now, it does. And no, that is not a coincidence. According to a former resident, the Hillsborough Architecture Design and Review Board was established just after the home was built for the purpose of ensuring that “there would never be another home like that built in Hillsborough.” The current 78-page list of design guidelines claim to have no problem with Modernism itself, but does say—without naming any names—that “when this style is designed badly or executed poorly, the results can be dramatic….” The guidelines note that Modernist dwelling plans therefore “will be subject to a higher level of scrutiny” before being approved.

The Flintstone House does get a higher level of scrutiny, but it’s too late for the Board to not approve it, since it’s already there. Obviously, the town has never liked the place, but it liked it less and less after Ms. Fang bought it in 2017 and started installing dinosaur statues and concrete mushrooms and whatnot. It did issue a permit for a retaining wall in late 2017, but then an inspection “found other improvements outside the scope of the permit,” and the town’s building department ordered Fang to stop work on those things. It issued a second stop-work order the following month, and then another one seven months later, all of which Fang seems to have mostly ignored. The lawsuit followed.

Ms. Fang, who has enough money to buy a home in Hillsborough, five 15-foot dinosaur statues, and a whole lot of other crap besides, definitely had enough left over to hire a lawyer. The lawyer promptly held a press conference, suggested the city’s motive might have been discriminatory (anti-Asian, not anti-Flintstone), and threatened to file a “very ferocious counter-claim.” I don’t know how ferocious it was but she did file one. Both lawsuits were resolved in the April settlement.

According to this report, Fang agreed to drop her lawsuit and to apply for permits in the future, and the city agreed to approve permits she will submit retroactively for the existing improvements. The city will also pay Fang $125,000, which the settlement agreement reportedly says is “solely to cover expenses incurred by Flintstone related to the lawsuit, and shall not be as a payment related to any claim for discrimination,” which the city denies. The report does say “incurred by Flintstone,” so either the house was a co-plaintiff suing on its own behalf (“Flintstone House, Inc.” (hereinafter ‘Flintstone’)”), or that’s a pretty good semi-Freudian slip by the reporter. I could look it up, but I don’t want to.

Messages Not to Leave for a Judge, #47

If Great Literary Works Had Been Written by Lawyers

Professor: Maybe Secret Legal Memos Are Secret Because They Suck